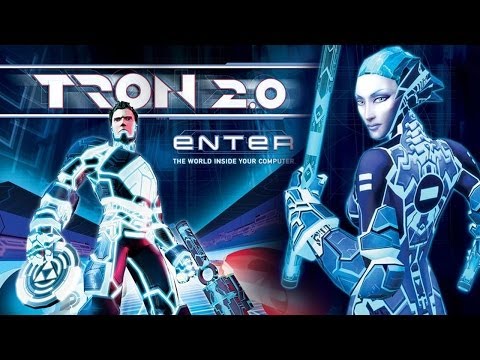 Tron 2.0 is a first-person shooter computer game developed by Monolith Productions. According to Tron creator Steven Lisberger, Tron 2.0 was the official sequel to the 1982 film Tron, but was later declared non-canon by Tron: Legacy director Joseph Kosinski. The PC version of the game was released by Buena Vista Games on August 26, 2003. The Mac version was released by MacPlay on April 21, 2004.

Bruce Boxleitner reprises his role from the original film as Alan Bradley. Cindy Morgan, who also starred in the original film, voices a new character Ma3a, although Lora Bradley (now Alan's wife, deceased by the game's timeframe) is mentioned by name. Rebecca Romijn provides the voice of Mercury. A new 'light cycle' design was contributed to the game by Syd Mead. The game explained the Tron arcade game, which appears in-game, and film as based on Kevin Flynn's experiences inside ENCOM in the original film.

The single-player campaign takes place entirely inside the computer's world (though some cutscenes are shown of the ENCOM research laboratory). The goal of each level is generally to complete tasks and find keys ("permission bits") which allow access to the next level.

The design of the game's levels is linear; there are no choices about how to proceed or of what to say during the interactions with other characters. The levels feature energy bridges and gates, neon-glowing contours, vibrant colors, floating boxes and tiles, teleports and deep chasms. Jet will be harmed if he falls from a height (or killed if the height is great enough), or be crushed by certain moving objects in the digital world.

Jet begins with the disc weapon seen in the movie; but obtains other weapons similar to a shotgun, a submachine gun, a sniper rifle, and grenades. Ammunition for these new weapons is energy, which Jet can collect at various points during the game (an exception is the disc, which uses no energy in its basic form). The in-game names for these weapons are, respectively, disk, rod, mesh, and ball. The other weapons are upgrades of these basic weapons (called "primitives").

Jet's abilities are customizable, as his in-computer program earns "build counter" upgrades - when earning a level, Jet 1.0 becomes Jet 1.1, and so on. He acquires new abilities, and also the aforementioned weapons, in the form of "subroutines" held in "archive bins" scattered around the levels, and he has a limited number of memory slots in which to "install" these subroutines onto his person. Subroutines start out as alpha-grade software, but can be upgraded to beta and gold statuses, which both take up less space in memory and become more effective.

As he moves through the levels, Jet must engage many lower-tier enemies. Although none are particularly powerful, they usually appear in gangs, making them more of a threat. Among the regular levels, there are some with boss enemies.

Interspersed with the first-person-shooter levels are several light cycle races. As seen in the movie, these races are actually arena duels in which each light cycle attempts to destroy its opponents by driving them into its jetwall. The arenas contain 'improvements' (such as speed zones that affect the cycles' speed), more complex layouts with walls and other artifacts (instead of the "empty box" as seen in the movie), and power-ups that can be collected during races. In addition to Tron's regular light cycle, Jet can also gain access to the super light cycle that sports a more modern design and offers more speed. Tron 2.0 initially required the player to win the light cycle races in order to advance the campaign. Consumer feedback revealed that many felt the computer-controlled light cyclers were impossibly precise in their controls (turning at speeds a human could not, or boxing themselves in,for example), forcing players to wait for the enemy light cycles to destroy themselves. As a result, the vendor released a patch eliminating this rule.

The additional light cycle mode contains no campaign; instead, the player is presented with a choice of several light cycle arenas.